Why Europe Should Prefer SmallCannabis™


For people, planet, and profit

What will cannabis’ global supply chain look like after this global cannabis price collapse?

As the Hungarian-British physicist Dennis Gabor stated, “The future cannot be predicted, but it can be invented.”

In the context of SmallCannabis, I define “cannabis” to mean cured, legal flowers of Cannabis sativa L. (and any subspecies and hybrids thereof, excluding hemp) and the extracts of said flowers.[2]

Why the developing nations?

Because the combination of cannabis’ optimal terroir and low wages is found only in the developing nations.

Cannabis originated in Asia, where, for thousands of years, Asia’s smallholder farmers bred the indica strains of cannabis to thrive in the hot, dry summers of the sub-tropical Himalayan foothills, and the sativa strains to thrive on the tropical mountains of Southeast Asia (notably Thailand). Both locations are on the equatorial side of 35° latitude, which facilitates a long flowering period of nearly equal-length days. In this optimal terroir for (non-hemp) cannabis, hundreds of generations of smallholder farmers steadily improved their cannabis strains and production techniques to produce exquisite cannabis. Meanwhile, cannabis spread westward to similar terroir in Africa, the Caribbean, and the Americas.

Continental Europe is too far north to have optimal terroir for cannabis (see Figure 1, below), just as it is too far north to have optimal terroir for cocoa, coffee, and vanilla. Nonetheless, one could grow these crops profitably in European greenhouses if the price were high enough. As Adam Smith pointed out in The Wealth of Nations, “by means of glasses, hotbeds, and hotwalls, very good grapes can be raised in Scotland, and very good wine too can be made of them at about thirty times the expense for which at least equally good can be brought from foreign countries.” The same is true for cannabis.[3] 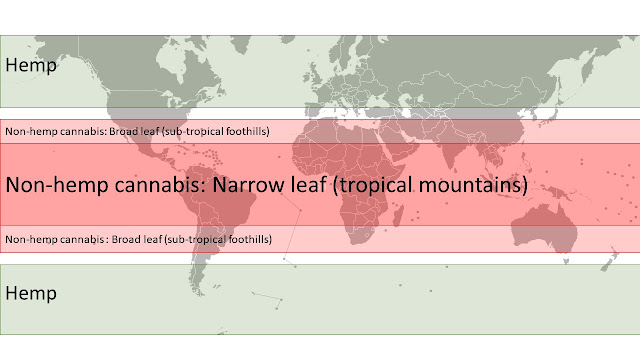 On the other hand, in optimal terroir, cannabis’ light source is the sun, its ideal temperature and humidity are the local climate, and its greenhouse is the sky. The cost to “build and operate” the sun, climate, and sky is zero, making it much less expensive to farm cannabis in its optimal terroir than elsewhere (all else being equal).

Another important cost-driver is labor. Europe’s wages are among the highest in the world, with seven of the top ten national minimum wages being European (with the other three being Australia, New Zealand, and Canada). These high wages are ill-suited to industries that rely primarily on hand labor, such as growing high-quality flowers. That’s why much of the world’s cut-flower industry has moved to developing nations such as Colombia, Ecuador, and Kenya, where wages are lower and terroir is optimal for cut flowers.

The combination of optimal terroir and low wages can dramatically reduce the cost – and hence the price – of cannabis. To quote Kyle Detwiler, CEO of Northern Swan Holdings, by growing marijuana in a SmallCannabis-producing nation, “We can cut our price 90% and still make money.”

Conclusion: SmallCannabis will be less expensive. 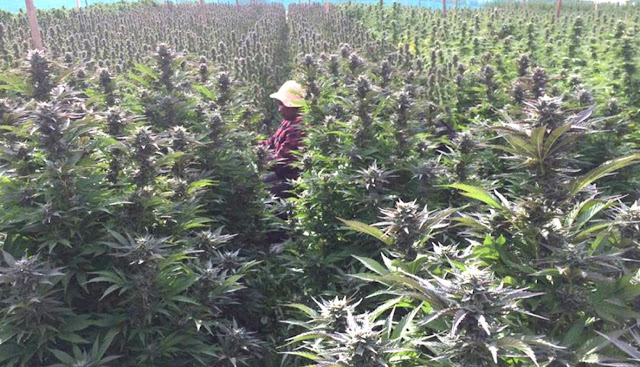 Figure 2: Cannabis being grown in a developing nation. Its light source is the sun, its ideal temperature and humidity are the local climate, and its greenhouse is the sky. The cost to “build and operate” the sun, climate, and sky is zero. (Photo from MediKingdom.)

When cannabis prohibition began, cannabis enthusiasts in “the West” (notably North America, Europe, and Australia) tried to grow the legendary sativa strains that they were prohibited from importing. However, these tropical sativa strains required longer summers than the West’s temperate climates provided. Hybridization with faster-maturing indica strains produced new strains that could mature outdoors in the temperate zone, albeit with a loss of quality. When police started using helicopters to find outdoor cannabis farms (of sativa hybrids and pure indicas), hybridization with Russian ruderalis produced new strains that matured even faster and at shorter height. This allowed cannabis farmers to shift their production indoors, away from the helicopters – although, again, with a loss of quality. Since then, Western breeders have produced a dizzying range of cannabis strains, some of which have arguably overcome the loss of quality that resulted from their production-focused hybridizations.

Now that cannabis has been re-legalized in nations with optimal terroir, the superior old strains should become available again, in all their diversity. We should also expect to enjoy new strains that have been bred from provenance-assured old strains solely for quality, rather than being bred to mature in a sub-optimal climate or in a police-evading basement.

Learning from similar efforts with other crops, the SmallCannabis Initiative can help sustain the diversity of cannabis strains (perhaps by using a model similar to the Cocoa of Excellence Programme) and bring cannabis to the European market efficiently (perhaps by using a model similar to CaféDirect’s). This can give new hope to the communities in the developing nations whose ancestors created the pure old strains from which all modern Western strains were derived. On optimal terroir, earning a living income, farmers in the developing nations can afford to invest the hand labor that is required to produce the highest-quality cannabis.[4]

Conclusion: SmallCannabis will be higher quality.

Although we can reasonably assume that today’s cannabis companies have the best of intentions, we should also be aware that global agricultural supply chains have been implicated in some terrible outcomes, such as:

These terrible outcomes arose from the interaction of many historical, commercial, and local factors, including “boom and bust” cycles that make famers’ income unpredictable and poverty-induced coping strategies such as deforestation, child and forced labor, and excessive debt.

Cannabis has two unique advantages in avoiding these terrible outcomes.

First, legal cannabis is the first entirely new global agricultural supply chain to be built after:
With cannabis, we can combine selected innovations with proven best practices to establish a paperless, digital-only sustainable global supply chain that transparently, traceably, and efficiently connects consumers to producers.

Second, the rapid spread of legalization, combined with the slow pace of regulatory implementation and the high cost of building cannabis farms in non-optimal terroir, has created a global shortage of legal cannabis. This shortage has kept prices temporarily high. Cannabis farmers in the developing world have a few more years of high margins, which can help fund the development of the SmallCannabis supply chain – but only if we act quickly.


Conclusion: SmallCannabis will be more sustainable.

Because the optimal terroir for hemp is on the polar side of 45° latitude, where long summer days help hemp grow tall (with relatively few, and smaller, flowers). This zone includes broad regions of northern Europe, North America, and Asia, and smaller regions of southern Australia, South America, and New Zealand. The mechanized agriculture of these regions is well-suited to farming hemp for fiber and edible hempseed. The nations in this hemp-optimal region can grow hemp and trade it to the SmallCannabis-producing nations for cannabis. Everybody wins!

Because Europe is predicted to become the largest market for cannabis products by 2022. As the largest cannabis buyer, Europe can have the most influence on shaping cannabis’ global supply chain.

Also, for decades, the EU has given tariff-reducing trade preference to imports from developing nations through schemes such as the Generalised Scheme of Preferences (GSP), GSP+, and Everything But Arms (EBA). These schemes have helped developing nations join and benefit from global trade, reducing poverty, enhancing sustainability, and improving social justice. This article proposes that cannabis be included within those schemes, and specifically to include cannabis produced in the upper middle-income developing nations that have suffered most from the global War on Drugs, such as Mexico, Colombia, Jamaica, and Thailand.

By working together now, before the global cannabis price collapse, we can afford to build a technology-enabled, transparent, traceable, and (above all) sustainable global supply chain, rooted in the developing nations, which can then serve as a model to increase the sustainability of all other commodities sourced from those nations. Today, the world’s first SmallCannabis -producers are already organizing…but they need your help.

However, SmallCannabis – being rooted in the relatively-poor developing nations – needs the support of individual Europeans and the companies, NGOs, government agencies, etc., that they represent.
Don’t wait! Take your first step today to help invent a sustainable future for cannabis: SmallCannabis.

.
Come change the world with me! Let’s all work together to get cannabis right from the start.


[1] SmallCannabis™ is a trademark of the SmallCannabis™ Foundation.
[2] The taxonomy of cannabis is debated, with “lumpers” lumping all Cannabis into one species and “splitters” splitting Cannabis into three or more species. Noting that any definition will attract dissent, this article uses the traditional three-species split (sativa, indica, and ruderalis) and defines “hemp” as any Cannabis strain with THC < 0.3%.
[3] Please recall that, in this article, “cannabis” is defined to exclude hemp.
[4] Some argue that automation can replace hand labor on cannabis farms. If that were true, why aren’t high-wage regions like Europe and the USA winning back the cut-flower industry from the developing nations?

Posted by Jim Plamondon at 3:14 PM